Ultrasound brain surgery has enormous potential for the treatment of neurological diseases and cancers, but getting sound waves through the skull and into the brain is no easy task. To address this problem, a team of researchers from the University of California, Riverside has developed a ceramic implant for the skull. Through which doctors can deliver ultrasound treatments on demand and on a recurring basis.

Titled “Novel Cranial Implants of Yttria Stabilized Zirconia as Acoustic Window for Ultrasonic Brain Therapy,” a paper describing the research was published this month in the journal Advanced Healthcare Materials.

Ultrasound—sound waves that are at a higher frequency than those audible to humans—can be used to treat a variety of brain disorders, including Alzheimer’s and Parkinson’s diseases. Ultrasound can also be used to kill cancer cells, dissolve blood clots during stroke, and open the blood-brain barrier to enhance drug delivery. However, the human skull, called the cranium, is between 2 and 8 mm thick and relatively dense. This means that most sound waves are reflected or absorbed before they make it into the brain.

To help doctors deliver therapeutic sound waves into the brain, the team developed and tested a transparent, ceramic material that could be used to replace a portion of the cranium. This allows easy, targeted transmission of ultrasound waves into the brain. The material, which is a new variation of the ceramic material Yttria Stabilized Zirconia (YSZ), is non-porous, allowing non-focalized, low-intensity ultrasound waves to pass through. 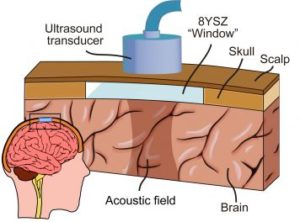 Ceramic materials show significant promise because they are biocompatible, extremely hard, and shatter resistant, making them ideal for implants. The team previously developed a YSZ cranial implant material for laser-based therapies, which is already in preclinical trials. The current material could be used to deliver both ultrasound and laser-based treatments.

“These materials are already being used in dental crowns and hip replacements, and our team is working to extend their application to the diagnosis and treatment of a wide variety of brain pathologies and neurological disorders,” Aguilar said.

“Developing an optically and radio-frequency transparent cranial implant was already an exciting accomplishment. We continue to work to make this implant a reality. Now, proving that ultrasound could be transmitted through the implant could expand its therapeutic capabilities even further.”

See full write-up here, or download the article with this link.

About the Author: Kelli Chase

This site uses Akismet to reduce spam. Learn how your comment data is processed.